I’m currently attending ProgNet 2018 held at SkillsMatter in London. This is an annual conference that focuses on the latest trends and technologies in the .Net space. The conference runs over three days, and consists of a day of talks followed by two days of instructor-led workshops.

I’ve been several times before and it’s always a good event, with a variety of topics covered over the three days. I especially enjoy the conversations outside of the sessions during the breaks and in the evenings, and the chance to mix with some very knowledgeable people.

During the first day of the conference, I sketchnoted the talks that I attended. Videos for all of the talks are available on the ProgNet 2018 website. 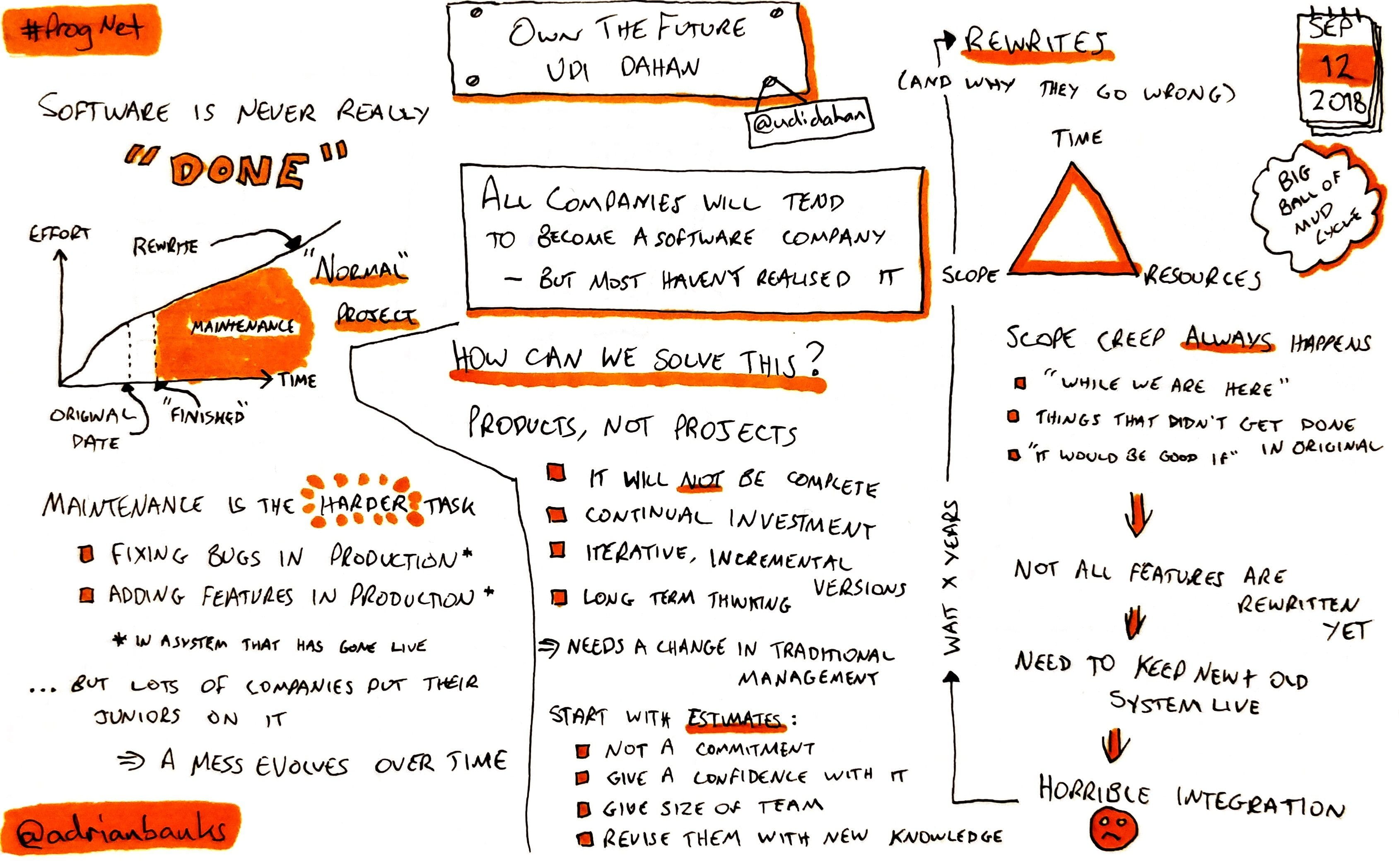 In this talk, Udi talked about the problems that companies tend to have when trying to maintain a piece of software over time. He highlighted the traps that are easy to fall into, including attempting to rewrite the software only to be left maintaining both the original big ball of mud and the rewrite side-by-side. He then suggested some techniques that can help, such as better initial requirements (including “why” something is wanted), giving better estimates, and working in a more iterative way. Ultimately his suggestion is to compose applications using the bounded context idea from Domain Driven Design to give better decoupling, keeping unrelated behaviours separate from each other, and preventing the big ball of mud from happening in the first place. 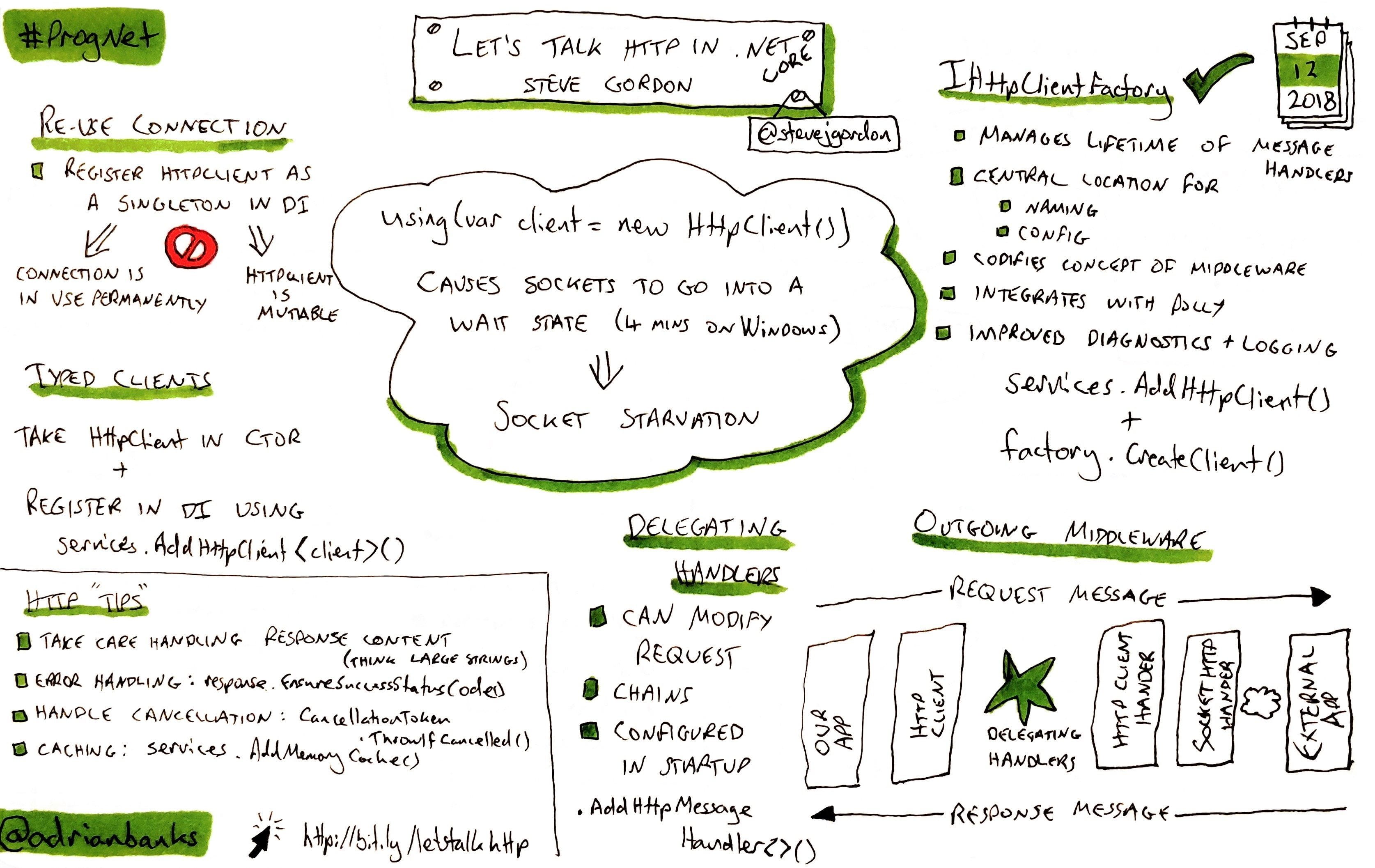 Many modern applications make use of HTTP for communication for calls between microservices, to 3rd party REST APIs, or even to cloud services. HttpClient is widely used to make these calls, but can cause serious issues if not done properly.

Steve showed some example code for making a remote call using HttpClient, and highlighted the issues that can happen in the underlying TCP layer as a result of its use. He then adapted the code in several steps to show how to use the IHttpClientFactory (introduced in ASP.NET core 2.1) to do it properly, including integrating with DI containers and middleware.

He also introduced Polly, a library for introducing resilience and fault handling into an application. With Polly, it is easy to configure the behaviours that should happen when errors occur, including retries, trimeouts and fallback.

Steve finished off the talk by giving some general tips for working with HTTP calls. 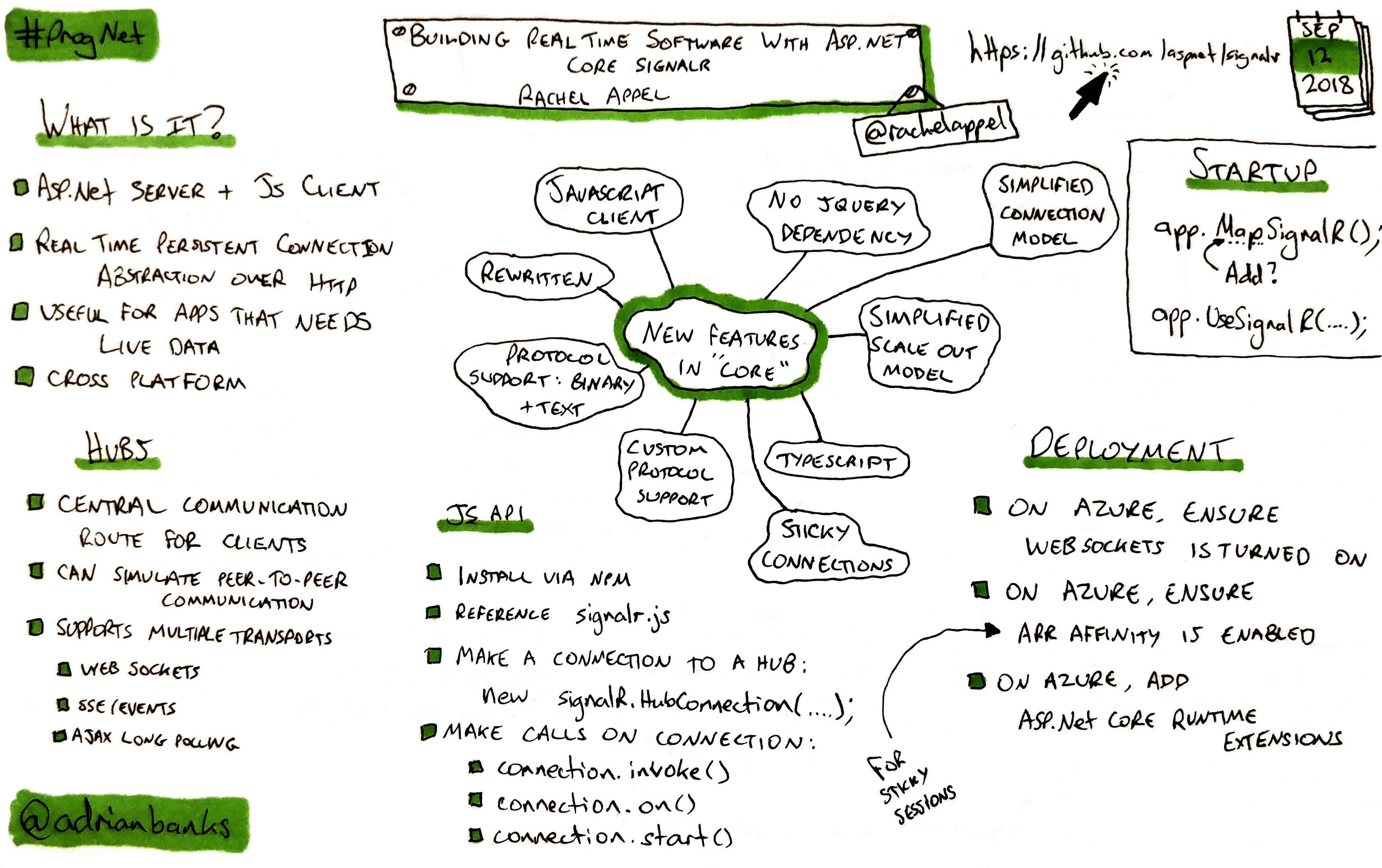 This talk was a beginner’s introduction to SignalR, a technology that allows real-time asynchronous communication from a server to clients. SignalR has recently been rewritten to remove some of the problems of the previous versions, as well as adding some new features.

Rachel started by explaining how to add SignalR to a web application, including its core concept of hubs that allow the communication between clients and the server. She showed how to configure a hub and how to send messages via it, using both the C# and Javascript clients.

She concluded the talk by highlighting a couple of settings that need to be changed when deploying to Azure to allow SignalR to work properly.

Learning To Code By Making Games 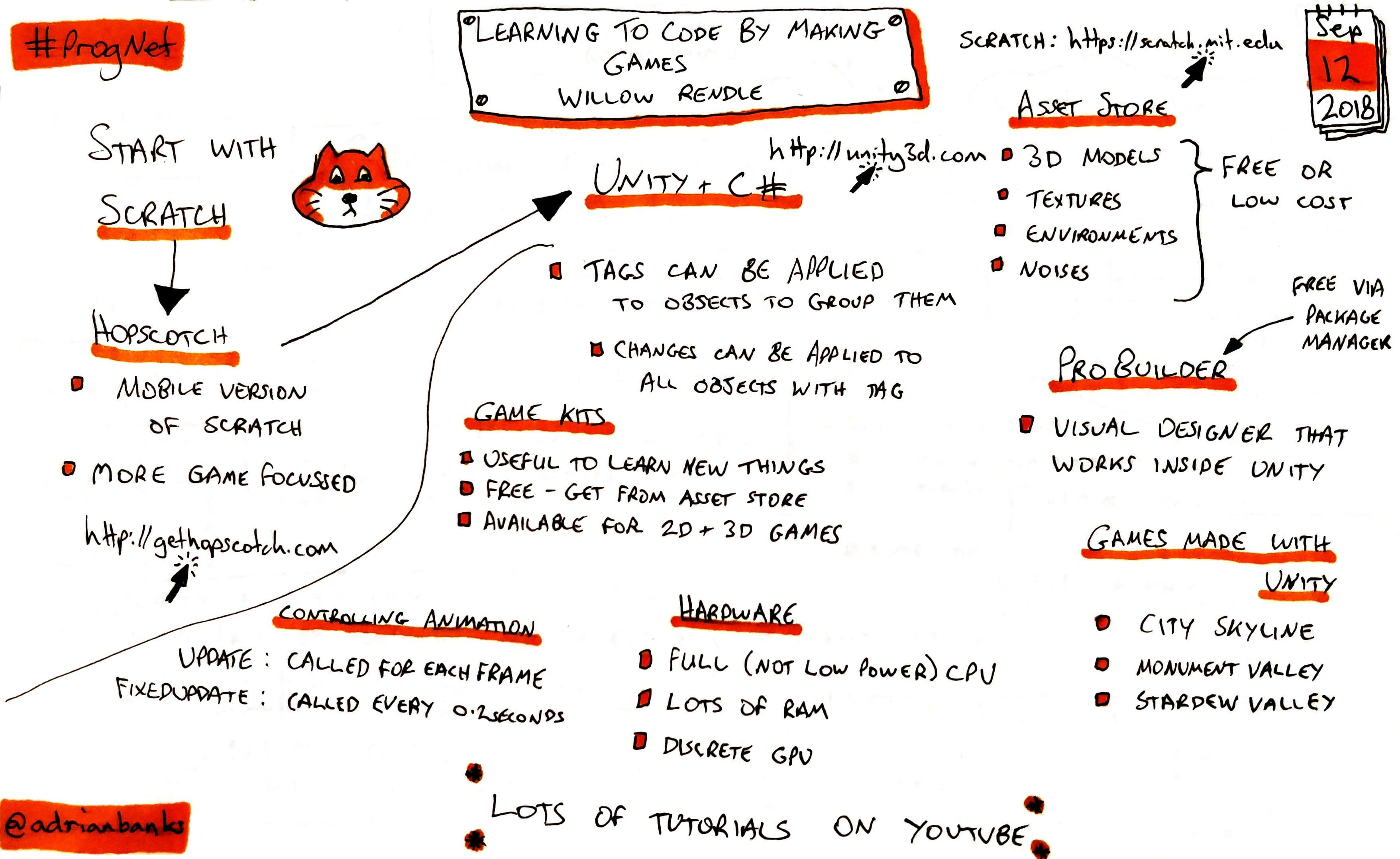 Starting with Scratch, then Hopscotch, and ending up at Unity, Willow (who is only 12 years old) described her journey in making games. Most of the talk revolved around Unity, its ecosystem, and the things that can be achieved with it.

Willow demonstrated some of the games she has made and the tools and techniques used to make them, including the many freely available models, textures, sounds and environments that can be downloaded from the Unit assert store. She then went on to demonstrate what is possible with Unity by showing off some of the freely available game kits (available for both 2D and 3D games) that are useful for learning from. These are full games that include the code and graphics that can be inspected to see how to achieve certain game effects and behaviours. 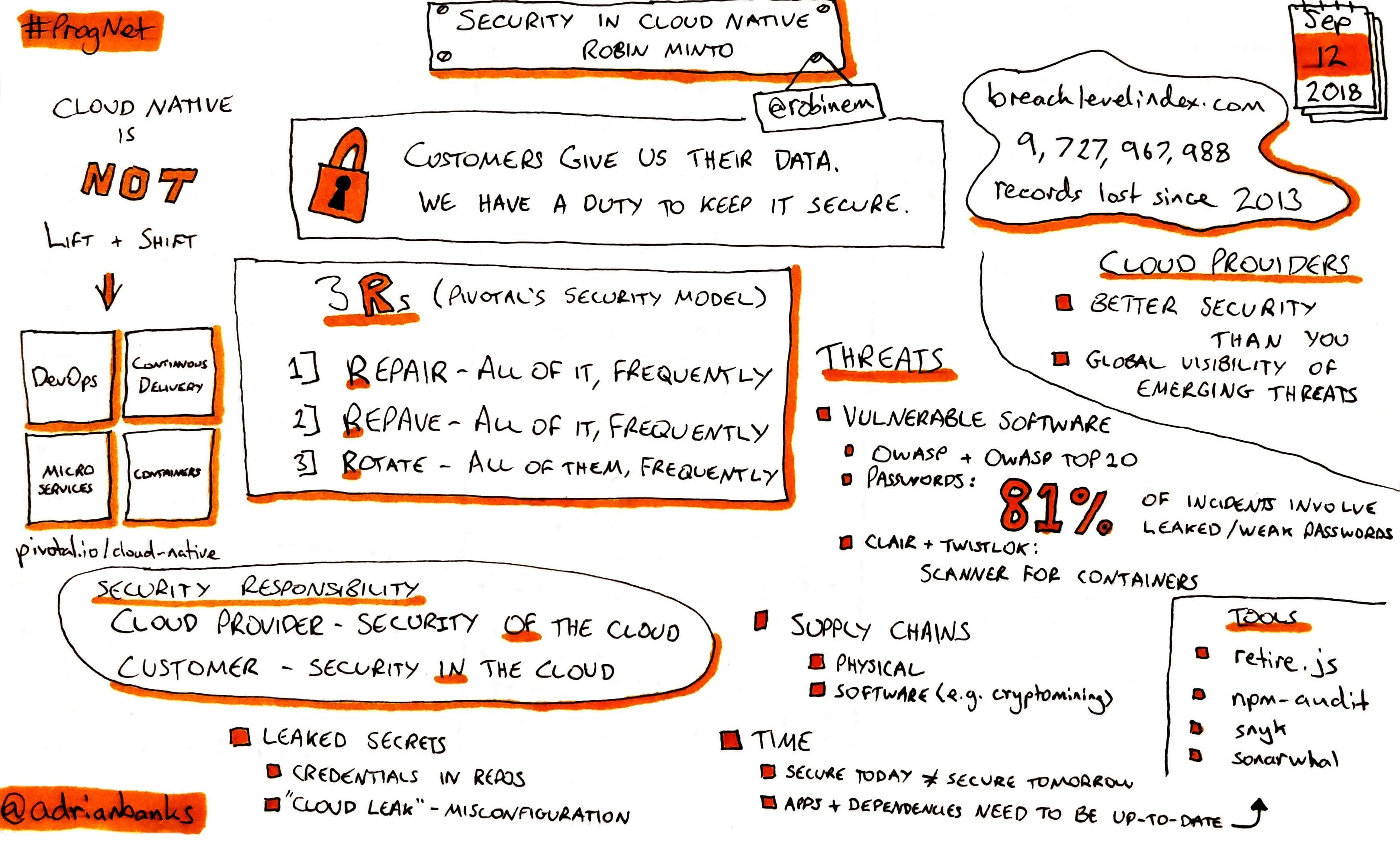 Robin talked about the importance of security in modern software, especially in cloud based systems.

He started by giving an overview of cloud native applications and described the three major threats to them: vulnerable software, leaked credentials, and time. These threats can be mitigated using a security model developed by Pivotal called the 3Rs: Repair (fixing software, patching infrastructure, updating dependencies), Repave (destroy and recreate environments to destroy anything nasty that may have got inside), Rotate (change credentials, certificate, keys regularly).

Robin went on to talk about the different cloud providers (e.g. Microsoft Azure, Amazon AWS, Google Cloud), and how they will always be better than you at security - they employ more knowledgeable security people and have more visibility and exposure to the latest threats. 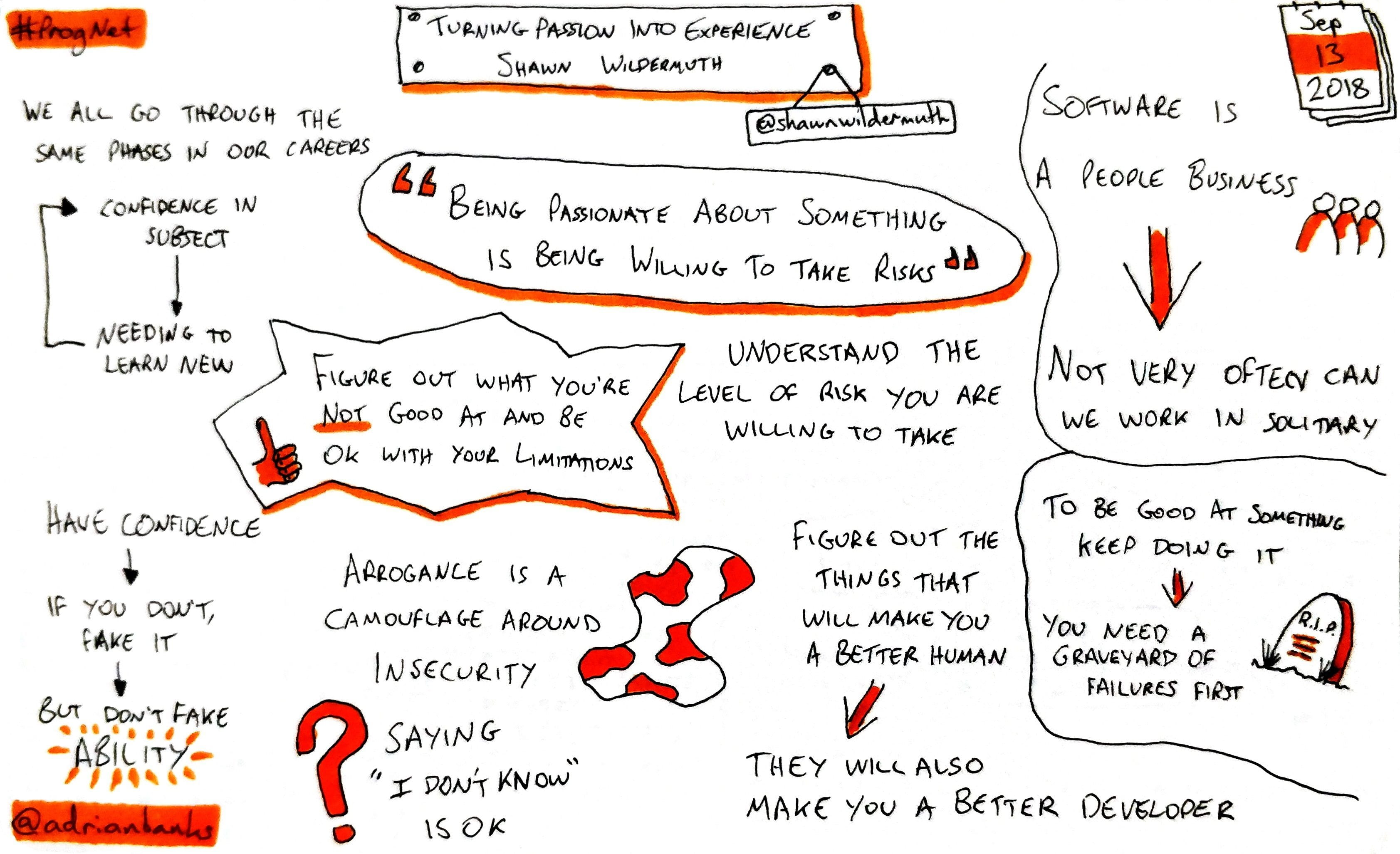 Shawn spoke about the importance of having passion and excitement about what you do as a developer. It is not enough however to have just these attributes - you have to be willing to take risks alongside them. He talked about his own experiences of following technologies that even though short-lived, gave him the opportunity to learn new things.

He gave examples from his own career of having imposter syndrome, and weighed it up against the arrogance that some developers use as camouflage to hide their insecurities. He also stressed the importance of saying “I don’t know” and that it is ok to do so, even as an experienced developer.

Shawn talked again about some of his failures, and highlighted how failures are useful because they are a learning opportunity and a moment of growth that you will be better for after experiencing. This has to be balanced against risk however, and you should understand what level of risk you are willing to take. 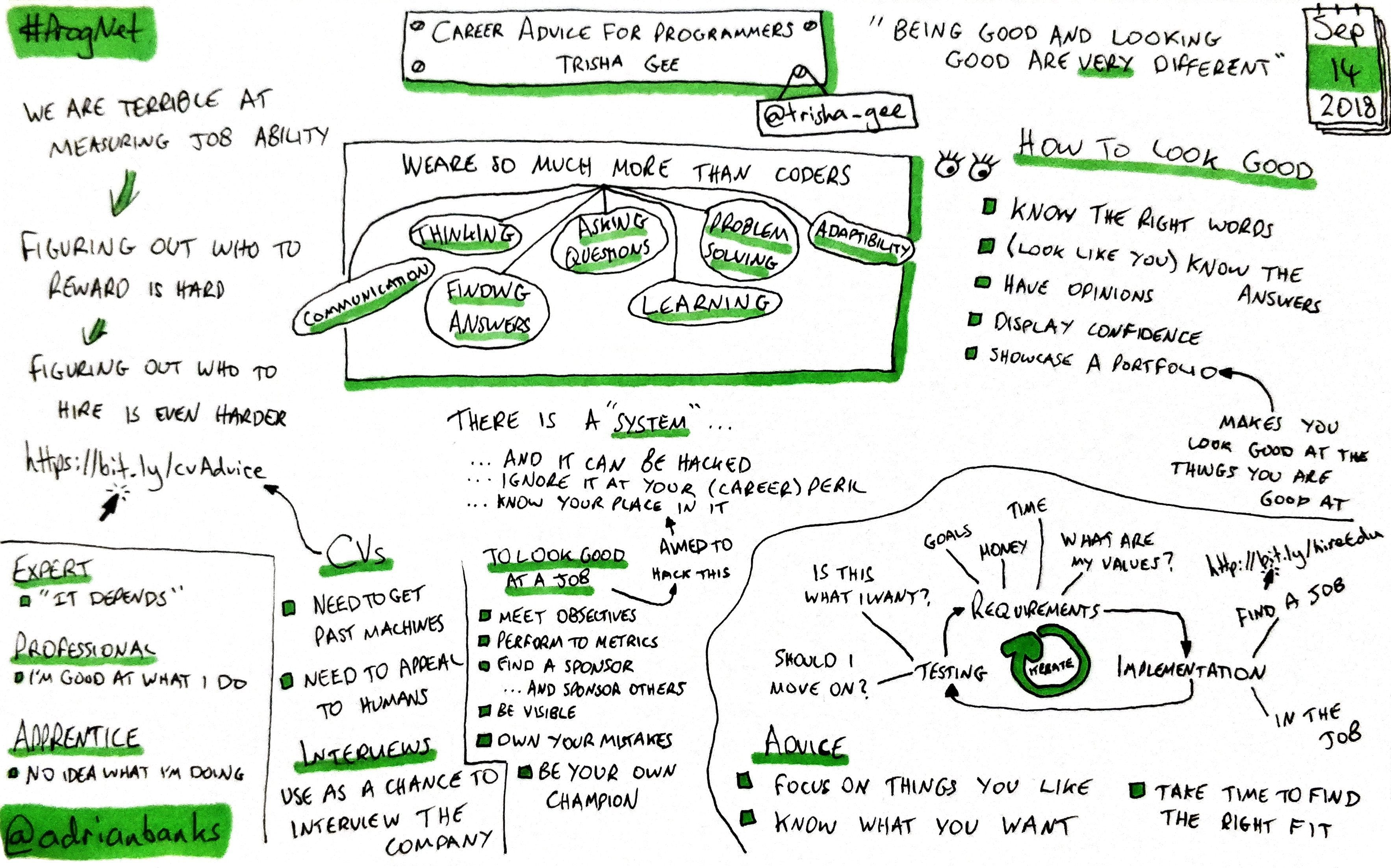 Trisha talked about how she now has the job she really wants (she is a developer advocate at Jetbrains and works remotely from Spain) after steering her career in that direction over a number of years.

She talked about the recruitment of developers and how the software industry is not very good at measuring programming ability, meaning that figuring out who to hire and reward is hard. As a result, being good at a job is not the same as looking good at a job. She then gave some tips on how to “hack the system” so that you can look like you are good at your job.

She concluded the talk by giving some advice on how to iterate on your career to move it forward.